Since the dawn of time people have liked to throw stuff at other stuff.

History Of Trebuchets - lots of info below!

Trebuchet History and Physics of Mechanical War Engines:
​
Sling:
The shepherd’s sling is one of the oldest projectile weapons. Sling effectively extends the length of the throwing arm by about 50 cm. Before the composite bow, slingers were as effective as archers.
The stave sling (or staff sling) is a sling on the end of a pole. Stave slings are more powerful because the stave can be made as long as two meters; Roman sources give their range as about one tenth of a mile.
Gastraphetes
The gastraphetes (`belly-bow´) was invented about 400 BC and is considered the first mechanical weapon. It was cocked by resting the stomach on the stock and pressing down.
The military effect of this weapon during the siege of Motya (Sicily) 397 BC encouraged the Greek engineers to develop a larger gastraphetes, mounted on a carriage with a windlass to cock it.

Ballista
Physical limits prevented further enlargement of the composite bow. In the mid-fourth century BC torsion springs, made from horse-hair or sinew, replaced the bow. Such a spring could be enlarged indefinitely.
Inscriptions on the Acropolis of Athens first mention torsion spring catapults there about 330 BC and Alexander the Great employed them on his campaigns.
The Greeks used two types:  the euthytonon for shooting arrows and the palintonon for throwing stone balls.
These war engines are better known today by their Roman name: the ballista. 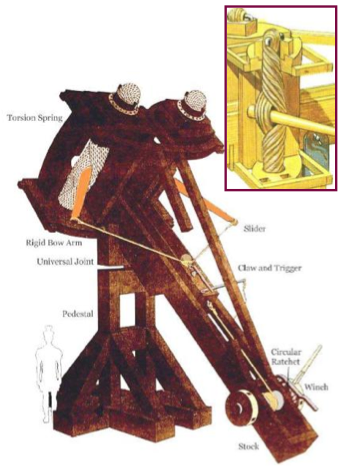 Onager
The onager (wild donkey), was a torsion engine similar to the ballista but only one arm. This catapult was the largest weapon used by the Roman army, almost exclusively for siege warfare. 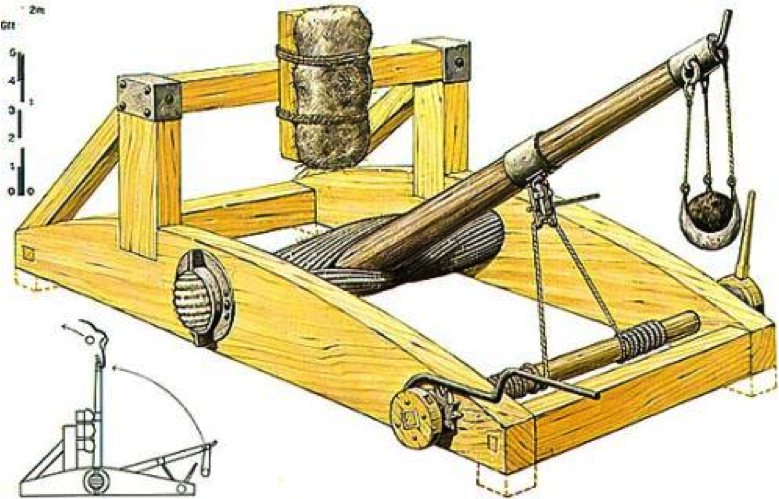 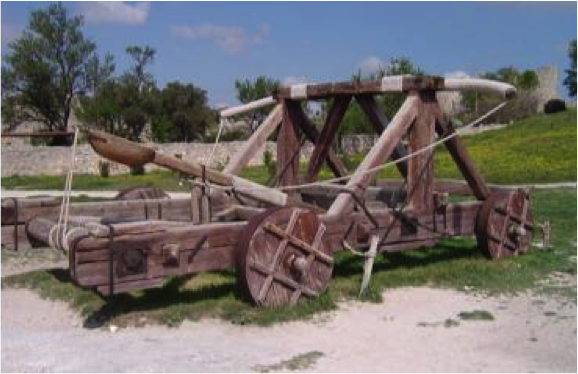 Traction Trebuchet
In the 6th century AD, the Chinese developed a large-scale stave sling with a crew that pulled the pole. Known today as a traction trebuchet.
Trebuchet
Trebuchet was the ultimate achievement in mechanical siege engines.
Developed in the Far East and brought west in the 10th century by the Mongol and Muslim armies.
Trebuchet's In Europe
European armies encounter and adopt the trebuchet during the Crusades of the 12th century.
Biological Warfare:
During medieval times, siege machines were the first weapons used for biological warfare.
The carcasses of diseased animals and those who had perished from the Black Death were thrown over castle walls to infect those barricaded inside. 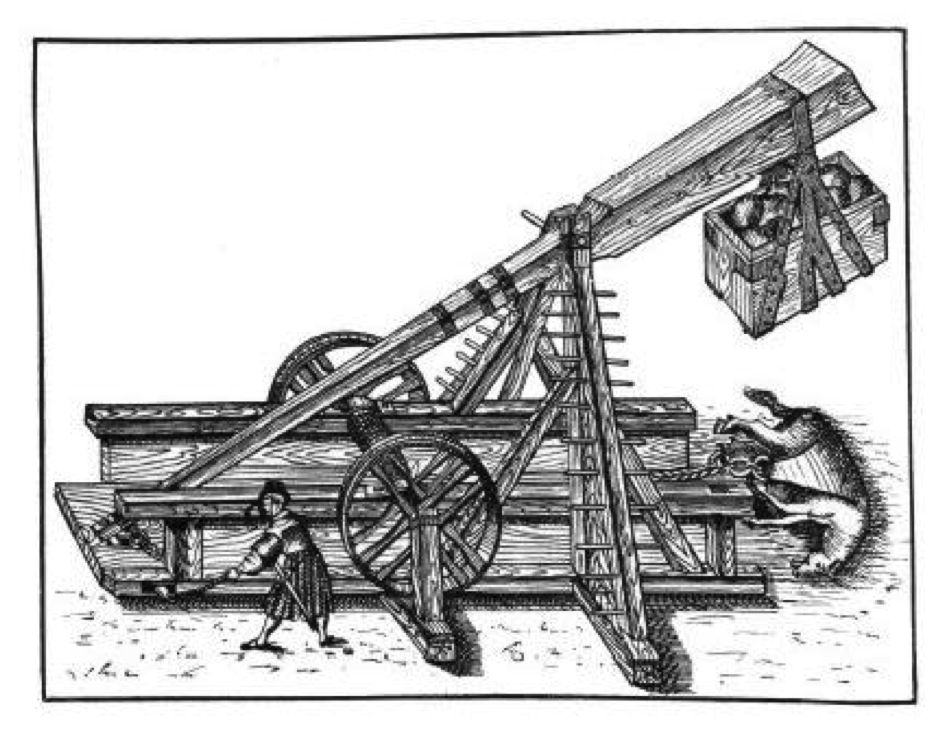 Mangonel
The mangonel is a simplified trebuchet using a fixed counter-weight. We will not be doing this design! Ours will be similar to the swinging baskets!
Decline of the Trebuchet
In this siege scene, taken from a 14th century document, a trebuchet stands behind the weapon that would ultimately replace it, the cannon. 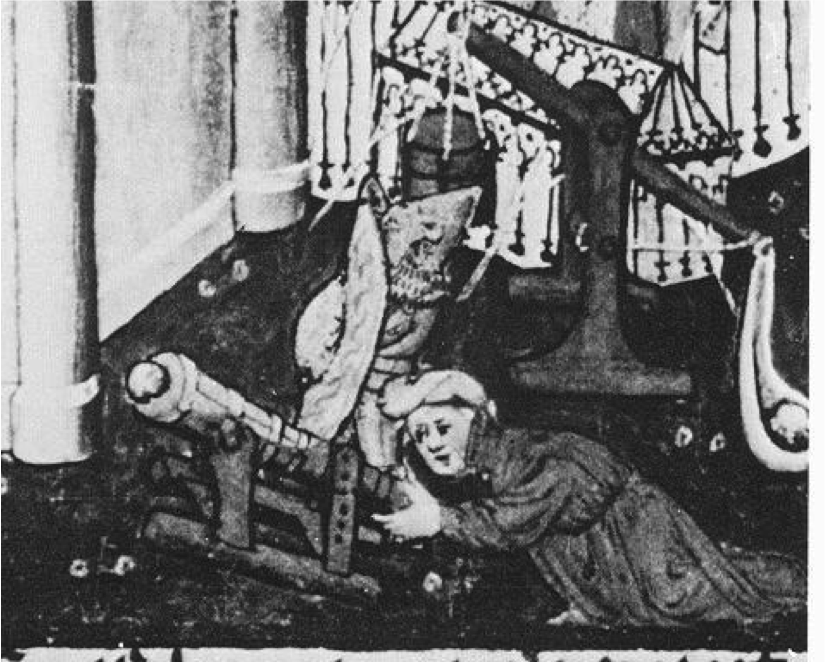 pew pew
Return of the Trebuchet

​Many modern reproductions of trebuchets exist today.
The trebuchet in Denmark’s Medieval Center is built of oak and medieval craft techniques were used in its construction.
Has a ballast of 15 tons and is designed to throw projectiles of up to 300 kg.
Picture below: Counterweight lifted by human powered “hamster wheels” 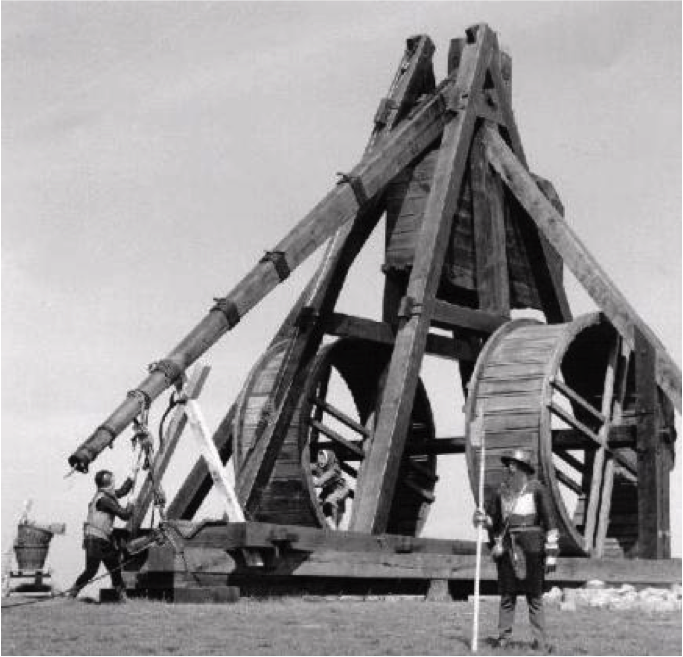 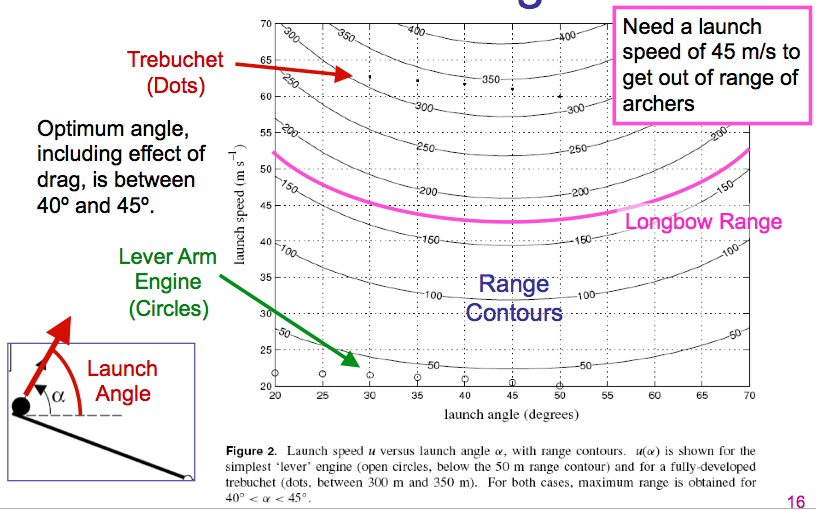 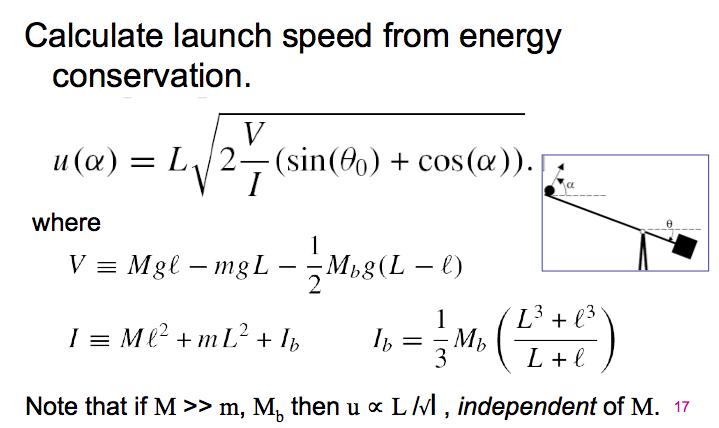 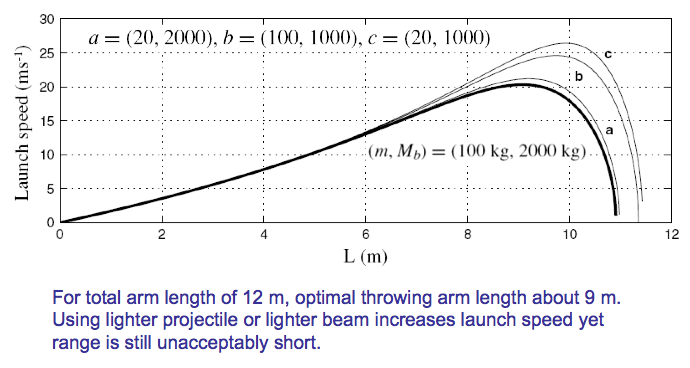 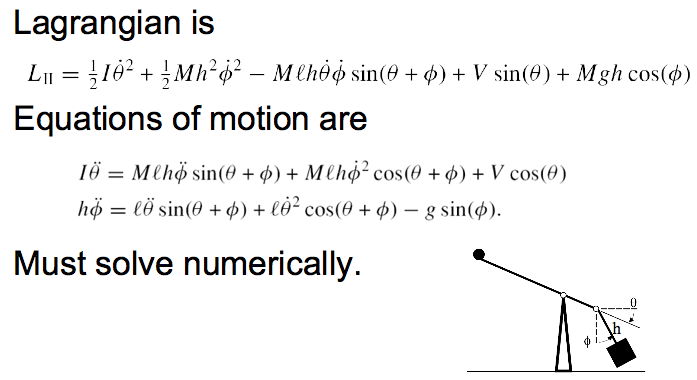 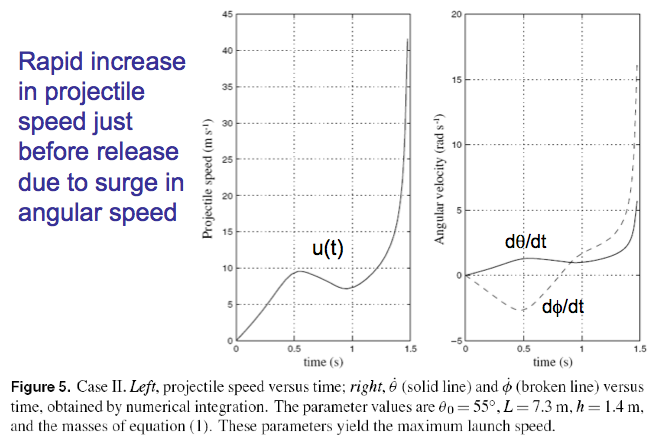 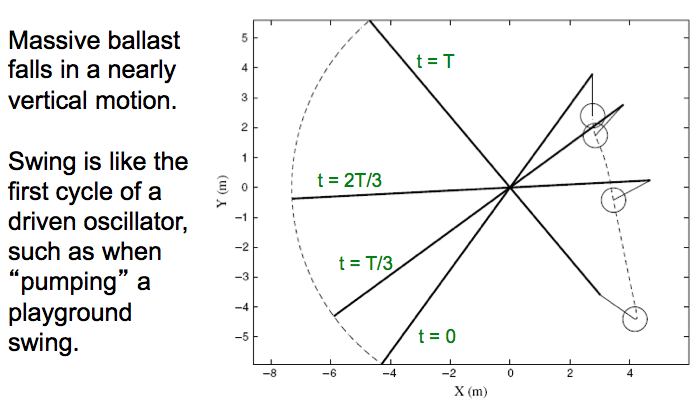 Super smart sounding Trebuchet Video - 9/10 DOCTORS AGREE THIS IS THE VIDEO TO WATCH!
VIDEO: Watch initial fall of the ballast and acceleration of the beam and sling just before release.
Slinged Mangonel (Simplified)
Results almost the same as for the sling-less mangonel (i.e., lever-arm machine) but with a longer arm.
Sling has the advantage of added mechanical advantage without added weight. 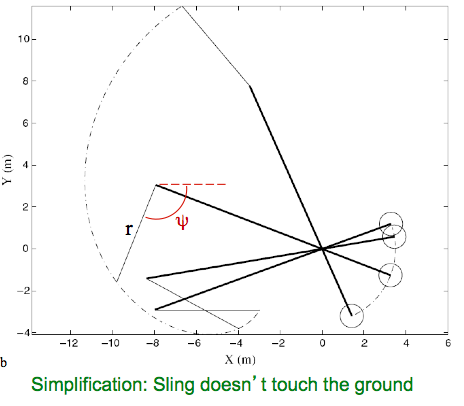 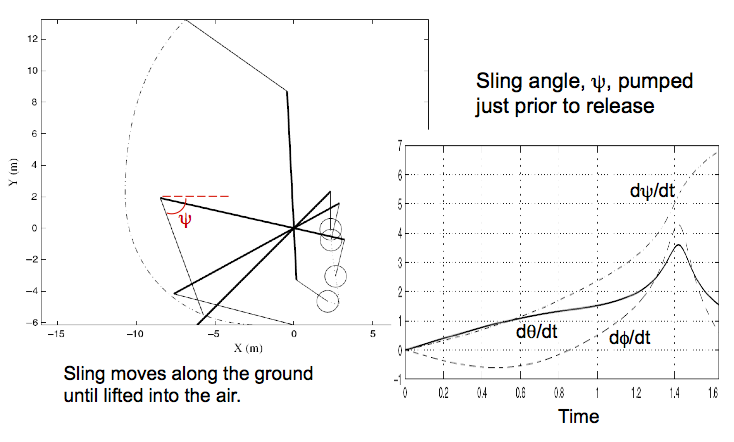 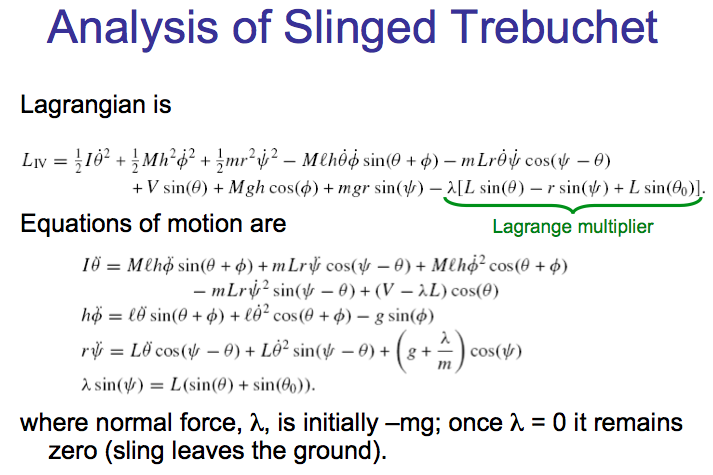 A simulation of trebuchets in action can be seen in the 2003 movie The Lord of the Rings: The Return of the King. The defenders of Minas Tirith fired their trebuchets from the top of the city's battlements. Although this appears very effective, it was never historically used, as castle walls were not big enough to hold a good trebuchet, and the forces exerted by such a siege engine on the walls would destroy them.
Proudly powered by Weebly